Living Kingdom: Hoarding up the gospel

“Then he said, ‘This is what I’ll do. I will tear down my barns and build bigger ones, and there I will store my surplus grain. And I’ll say to myself, “You have plenty of grain laid up for many years. Take life easy; eat, drink and be merry.”’ But God said to him, ‘You fool! This very night your life will be demanded from you. Then who will get what you have prepared for yourself?’” (Luke 12:16-21).

Like many who have grown up in the Church, I was raised with the promise of Jesus’ soon return and the hope that God’s faithful believers will be saved and brought to a new and amazing world free from any problems, conflict and trials. To those of us in the Church, the coming of Jesus is depicted as one of the greatest events that we could possibly imagine. I grew up hearing the second coming being described as “our assurance”, “our salvation”, “our redemption”—a day where evil and wickedness are destroyed and everyone lives happily ever after, “for ever and ever. Amen”.

Jesus’ parable of the Rich Man highlights this perfectly.

Like many of Jesus’ parables, the Rich Man has a dual meaning. The Rich Man represents wealthy people—both spiritually and financially wealthy—who decide to hoard up their wealth for themselves. In this parable, Jesus warns us, whether we’re hoarding up Scripture or whether we’re hoarding up our wealth in offshore tax havens, that there will be judgement against those who are deliberately ignorant of their community’s needs. We need to love our communities, and the only way to overcome our greed, whether spiritual or monetary, is to turn our eyes upon Jesus and live by grace.

In this interpretation, the Rich Man represents those who are spiritually rich, those who have been filled with the grain and received God’s blessings—but refuse to share it with others.

In the context of the parable of the Rich Man, the Jewish elites or Pharisees had failed at sharing the gospel with the world. The world was in need of the spiritual grain that had been harvested so well in Israel, yet the Jewish religion built up walls and built up barns to hoard the truth for themselves.

This is what we see in the story of the Rich Man. The Rich Man was someone who hoarded up the gospel for himself. Rather than feeding his community around him with the grace of God, the Rich Man decided to build a barn and keep the grain for himself. The Rich Man, through his selfishness, through being so self-centred, believed in his salvation to the point where he did not even consider the needs of others, he did not even consider that others would need to be saved, that others were yearning for the gospel so that they too could find peace in salvation and, most importantly, that they would be able to rejoice at the coming of Jesus instead of running in fear calling for the mountains to fall on them.

The Rich Man doesn’t care about the gospel work, he doesn’t care that others are missing out. He just wants it all for himself so that he can “eat, drink and be merry”. What the Rich Man does not realise is that he has spent more effort by building bigger barns and by hoarding up his spiritual wealth than he would have by simply living in generosity and sharing his gospel with the world. Furthermore, it is this attitude that displeases God, and as a result of it, the Rich Man misses out on the reward that he believed he had assured.

The Rich Man has no interest in the wellbeing of those around him. The reason—he lives by his works. Instead of having his heart transformed by the grace of God, he continues to live by his own efforts where he’s building bigger barns and storing up grain for himself. By his own efforts he attempts to secure his own reward. Had he lived by grace, he would not have worried about his own needs but instead been concerned about the needs of those who did not have access to grain. By feeding them all, not only could he have saved his community, but he would have been saved himself and not wasted his efforts building bigger barns.

Many of us may be spiritually rich. Maybe you’ve been nourished with the grain from your parents and your church families. You’ve had pastors and church members as mentors and role models, you’ve heard the testimonies of church elders and deacons, you’ve been taught the stories of the Bible and you’ve grown up with weekly Bible memory verse challenges.

Many of us are like the Rich Man—we have grain, but with that grain and with our spiritual wealth comes the responsibility of shining our light for others. For those of us who have been spiritually nourished, the Parable of the Rich Man reminds us of our duty to share our spiritual grain with others.

Are we like the Rich Man? Are we like people who are so eager for the second coming, so eager to hold onto truth that we forget about the needs of our neighbours outside the fold? Are we spiritually rich, but not spiritually transformed? Are we still living by our works, instead of living by grace?

The Parable of the Rich Man warns those of us who have been spiritually fed of being too eager for the second coming.

Maybe it’s not yet time to be eager for the second coming. Maybe we should be eager for our communities to be spiritually fed, so that they too will find “their assurance”, “their salvation” and “their redemption” when the Lord returns. 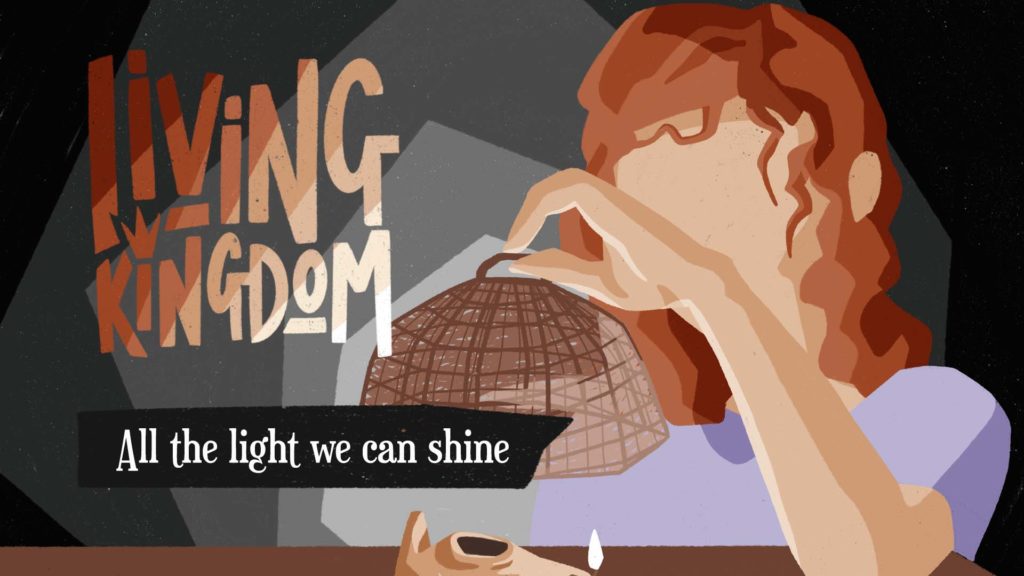 Living Kingdom: All the light we can shine